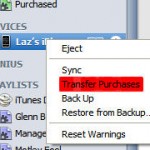 I have my older model iPod, before touch screens and all that, and it’s a great gadget as I am sure anyone out there with one already knows.  However, I recently purchased an iPhone 3GS and frankly it’s pretty much the best phone/PDA/PIM/etc that I have ever seen or had, and I started with my first PDA (Windows based Sharp) in the late 90’s, but that subject is for another day.  The big thing that really sets the iPhone (and iPod Touch) apart from it’s predecessors and many other phones, is applications.  Let’s face it, as cool as the iPhone is, it is loads cooler because you can choose from literally hundreds of thousands of applications to download and use, and the majority are either free or priced very low.

So, what does that have to do with my post?  Well, the only “problem” that I ran into, or that irritated me (aside from the fact that I can’t mark all email read), was that I did most of my app downloading on the iPhone itself.  This means that my iTunes would always have merely a fraction of the apps showing compared to what I had installed on the iPhone.  This made syncing less than fun, especially when I really wanted a copy of all of those apps that I paid for in case at some point down the line they dropped off of the store and I needed to re-install.  Let me tell you, if you haven’t already tried it, doing that manually by comparing the two and installing the deltas one at a time sucks.  Major.

Then I learned of a little feature in the iTunes app manager that saved the day, once you have your iPhone or iPod Touch plugged in (I disable automatic syncing of the device by the way) and the icon for the device is in the list above your playlists, simply right click there and choose “Transfer purchases”.  Check the picture where it’s highlighted red. Voila!  All of your apps get zinged over to iTunes from your iPod!  Ain’t that just slick?  That one tip has saved me hours of work, so I just had to pass it on to my readers.  This by far seems to be the easiest (and only) way to transfer your apps from your iPhone or iPod Touch over to your iTunes library.  Enjoy!